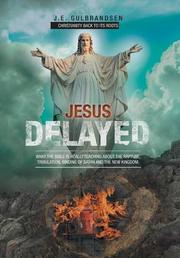 What The Bible Is Really Teaching About The Rapture

A radical reinterpretation of the Bible and the core of mainstream Evangelical theology.

At the heart of Evangelical thought today is its view about the final coming of Jesus. The generally accepted interpretation of it is known as “dispensationalism,” which states that Jesus will return to judge man for his sins sometime in the imminent future. Debut author Gulbrandsen, though, takes issue with dispensationalist arithmetic, asserting that the Bible unambiguously states that Jesus will appear a generation after the restoration of Israel. If the creation of the modern state of Israel counts as that restoration, he says, and a generation is approximately 40 years long, then the Second Coming should have happened around 1988. As it clearly didn’t, the author says that a new timeline, culled from a fresh reading of the Bible, is necessary. To that end, he says that Jesus’ death and resurrection ushered in a new covenant, and that his austere judgment was already delivered in 70 A.D. The implication of this new chronology is significant: in it, Satan has already been defeated, and the “Anti-Christ” discussed in the Bible, actually the Roman Emperor Nero, has come and gone. The final coming has yet to transpire, the author asserts, and it isn’t designed as a judgment of sin, but as a reward to believers. Gulbrandsen argues that his revision of dispensationalism liberates Christianity from the gloomy expectation of impending doom; the end of days, he says, is something for believers to enthusiastically look forward to. Also, he says, Christians have every reason to expect faith itself to expand across the globe: “A few years from now, most of Christianity will be catching on. A generation from now, dispensationalism will only be a few chapters in the church history books.” Gulbrandsen’s argument is a provocative one, and it’s hard not to be impressed by both his marriage of hopefulness and eschatology, as well as his willingness to challenge received orthodoxy. He articulates his exegetical positions with considerable care, if sometimes with a touch of bombast. The author is an Evangelical addressing other Evangelicals, and this theological tract likely won’t appeal beyond that particular crowd. For those within it, though, this book provides valuable fodder for serious consideration.

An important contribution to Evangelical thought.