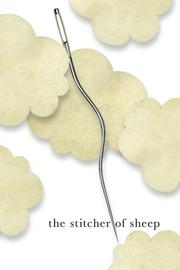 THE STITCHER OF SHEEP

A whirlwind collection of more than 100 different dreams over the course of two years, ostensibly dreamt by the author, JETHERIOT.

This curious book forays into the most logic-averse, frightening and primal aspects of human psychology—not as it exists in textbooks, but in the nightly occurrence of sleep. The results are as comical as they are unsettling: In turn, the narrator finds himself at the Grammys, at scenes of animal mutilation and resurrection, and discovering a briefcase made of glass but filled with magic wands. Often, the accounts are rich with the visual, auditory and even gustatory sensations that can appear so sharply in REM sleep. In a particularly vibrant dream, the speaker remembers that he played a scale on a piano painted in the colors of the rainbow: “pewter, platinum, lavender, lime, rosewood, lemonwood, cocoanut.” Other seemingly nonsensical but beautiful scenes inhabit the volume, which is usually captivating regardless of its veracity (the book’s back cover claims that the dreams were recorded “without embellishment or exaggeration”). Though most of the book seems concerned with description over analysis, the depictions sometimes veer into philosophy, as when he encounters a “human gargoyle” or when—in a moment vaguely reminiscent of Gulliver’s Travels—JETHERIOT views an “elfin creature” through a pair of binoculars, only to find that the creature is actually himself. Moments like these prompt questions about how the self relates to the unconscious, but the book doesn’t pursue those trains of thought. There doesn’t seem to be a coherent, unifying direction for the book, which speaks to either its failure or success, depending on expectations: Readers eager to peer inside a sleeping man’s head will find plenty of enjoyment, but those who desire a digestible revelation from all these midnight musings will be disappointed.