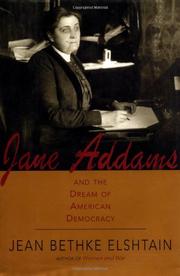 JANE ADDAMS AND THE DREAM OF AMERICAN DEMOCRACY

A perspicuous charting of the pilgrim’s progress that was Jane Addams’s hopeful, generous life.

Social activists get buffeted around more than most after they die both by their detractors and their champions. Elshtain (Social and Political Ethics/Univ. of Chicago; Real Politics, 1997, etc.) works hard, and successfully, here to clarify Addams’s goals in opening Hull House, the great settlement house in Chicago, and more generally in leading the life she chose. She persuasively establishes Addams’s importance as a social theorist, though that aspect of her work has sustained the most consistent attacks, by deploying extensive passages from her writings and speeches to illustrate her freethinking approach and her frequent eloquence. Elshtain has no difficulty dismissing the specious accusations of condescension, cultural fascism, and racism that have been leveled at Addams. Nor is it difficult to understand why her defense of anarchists, her peace activities, and her defense of immigrants and aliens won her such calumny. But her account of the founding of Hull House—beginning with what influenced Addams’s vision of it, from George Eliot to the social gospel—most decisively displays the great reformer’s empathy and humility and best explains how she could open the eyes of so many others to their abilities and possibilities. It is as difficult to imagine such an establishment now as it must have been wonderful to see it then: a place “available to any and all citizens of a city, including bewildered newcomers,” where hospitality, education, art classes, avenues of debate, even a bath, could be found along with childcare, union organizing, theatrical performances—the whole political and civic life of Chicago. “One is left nearly breathless,” Elshtain concludes.