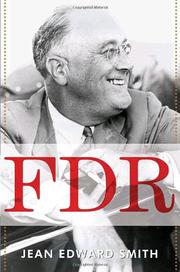 An outstanding biography of “the most gifted American statesman of the twentieth century,” who, to the consternation of conservatives ever since, created the activist presidency.

Franklin Roosevelt was callow and arrogant when he entered politics. Descended from the colonial aristocracy, he had all the prejudices of the moneyed class. But, recounts an admiring Smith (John Marshall, 1996, etc.), the polio that confined him to a wheelchair converted him into a champion of the common man for much of his career, particularly as president. Smith writes that FDR was hardworking, astute, smart and vindictive; he punished enemies for decades, while his political friends reaped ample rewards. So it was that, in the storied Hundred Days that opened the New Deal, Roosevelt “let it be known that he would make no patronage appointments until the end of the session”—and he had more than 100,000 of them to hand out, an arsenal calculated to repay loyalty. Just so, Roosevelt carefully administered the pork, though at the same time he delegated authority to those he deemed trustworthy—a roster that did not include his wife, Eleanor—and practiced what might be called a controlled candor so that the press and people would see things his way. The result of this highly practical, even Machiavellian politics was an unprecedented four terms in office, preceded by unprecedented electoral landslides. Critics will note in Smith’s pages that FDR was preparing to enter the war on the Allied side much earlier than the standard sources allow, but they may be disarmed by Smith’s view of FDR’s response to the Holocaust, which has generated much controversy. (The sole shortcoming: FDR’s career was so vast and complex that, large though it is, Smith’s narrative sometimes takes shortcuts; his account of the GI Bill of Rights, for example, leaves out key players and elides the tale so that FDR seems its only author.)