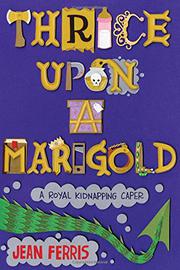 THRICE UPON A MARIGOLD

From the Marigold Trilogy series, volume 3

A royal kidnapping leads to romance for the rescuers and justice for the culprits in this airy series’ latest episode.

Court librarian Phoebe and bookish young blacksmith Sebastian have only just met when evidence emerges that their evil fathers—ex–torturer-in-chief Boris and former official poisoner Vlad, respectively—are responsible for newborn Princess Poppy’s disappearance. The news sends them, along with King Christian and Queen Marigold, in hot pursuit into the local magic forest. Much blundering about ensues for pursuers and pursued alike as various tricks, traps and reversals of fortune play out to an intrepid rescue, a summary comeuppance and a round of newly minted friendships. The adventure closes with a grand Welcome Party for Poppy with Cinderella, Santa Claus and various fairies in attendance. As before, the author dishes up a tale well-stocked with broadly drawn characters and fairy-tale conventions knocked slightly askew. Both cogent side comments (“Nobody ever gets enough appreciation, even kings”) and throwaway references to, for instance, venti-size flagons of mead (“Breakfast of champions”) add spice.

A delicious confection for fans of the previous operettas, reminiscent in tone and content to Patricia Wrede’s Enchanted Forest Chronicles.