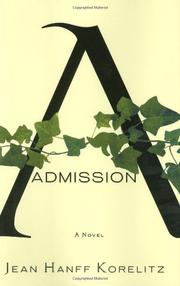 Gripping portrait of a woman in crisis from the extremely gifted Korelitz (The White Rose, 2005, etc.).

Portia Nathan should be happy. She’s proud of her work as an admissions officer at formerly country-clubbish Princeton, now a bastion of multiethnic excellence thanks to the dedication of Portia and her colleagues to finding the very brightest of all races and classes. OK, her relationship with her aging New Lefty mother Susannah is distant, and she’s hardly more intimate with longtime live-in boyfriend Mark, chair of Princeton’s English department. Maybe that’s why, during a recruiting trip in New England, Portia falls into bed with John, who teaches at the ultra-alternative Quest School. Portia is startled but impressed by Quest’s think-outside-the-box students, especially Jeremiah, a brilliant autodidact she thinks belongs at Princeton. But when John tells Portia (who didn’t recognize him) that he knew her as an undergraduate at Dartmouth, it’s the first in a series of unsettling events that unravel her carefully controlled life. Susannah has taken in a pregnant teenager; Mark confesses that he’s knocked up a fellow professor and moves out. Poring over hundreds of application folders, faced with her annual task of “winnowing the stupendously remarkable from a vast field of the only normally remarkable,” Portia slowly comes unglued. By now, we know that she got pregnant in college, and whatever choice she made about it has shadowed her ever since. It seems for a while that the narrative might lead us toward a tearful mother-and-child reunion, but Korelitz demands far more from her lovable heroine. Portia comes to understand that her wounds are partly self-inflicted, and she demonstrates her commitment to change with a brave, rule-breaking act she knows will be punished. It is, but we believe Portia will pick up the pieces because we’ve seen that she’s ready to take some of the care she’s always lavished on anxious college applicants and devote it to herself.

Strongly plotted, crowded with full-bodied characters and as thoughtful about “this national hysteria over college admissions” as it is about the protagonist’s complex personality—a fine, moving example of traditional realistic fiction.