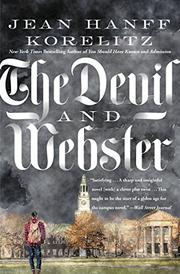 THE DEVIL AND WEBSTER

The president of an elite New England college grapples with student protest in Korelitz’s sixth novel (You Should Have Known, 2014, etc.).

Naomi Roth is Webster College’s first female president, a fitting denouement to the school’s half-century evolution from a bastion of WASP privilege to a progressive institution housing a diverse faculty and student body. Naomi, herself from an earlier generation of demonstrators, is inclined to be tolerant when a group of students camps on the Webster quad to protest the denial of tenure to popular professor Nicholas Gall. Although the students insinuate it’s because Gall is black, in fact his only published work was found to be plagiarized—but if Naomi says that, Gall could sue the college. She hopes the protestors, who include her daughter, Hannah, will soon fade away, but she hasn’t reckoned on the charisma of Omar Khayal, a student of Palestinian origins, whose soft-spoken demeanor belies his ability to inflame the situation at every turn. Korelitz has always been a deft plotter, so presumably it’s intentional that readers will figure out Omar is not what he seems long before Naomi does. She is the latest in the author’s long line of smart but blinkered female protagonists, but this time the origins of Naomi’s obtuseness remain murky, and her relationships with secondary characters like best friend Francine Rigor, Webster dean of admissions, are less fully fleshed than usual. In addition, the academic concerns that made such a vivid backdrop for the human drama of Admission (2009) here seem excessively self-referential, as does the endless wrangling about just how inclusive Webster really is. Granted, this is currently a hot topic on real-life campuses, but it needs a more compelling fictional framework. Nonetheless, Korelitz’s smooth prose and unfailing intelligence make this novel worth reading, if not quite up to her usual high standards.

A bit of a disappointment from a talented author.