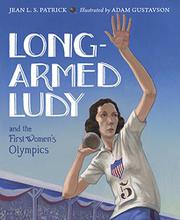 The true story of an exceptional athlete and a unique competition.

Active from an early age, Lucile “Ludy” Godbold runs and swings from tree branches and plays tug of war with her dogs. “Six feet tall and skinnier than a Carolina pine,” the young white woman enters Winthrop College in 1918. Always on an athletic field, she uses her extra-long arms to cheer on teammates. In her last year on the track team, she tries the shot put, setting a record at over 35 feet. Ludy and her coach immediately hop on a train to New York, where tryouts are being held for a new international meet called the Women’s Olympics, an independent competition. In Ludy’s tryout, she breaks her own record and earns her spot, though she fears that lack of funds will keep her home. But one day, the college president intercepts her as she’s running by and tells her that the students and faculty have raised what’s necessary to send her to France, where this new competition’s being held—and where she clobbers her own previous world record. Who knew? Patrick’s folksy account is crisp and packed with facts. Gustavson’s evocative illustrations combine oil paintings with gouache on watercolor paper, painting Ludy as a gangly beanpole with an enormously expressive face. Backmatter includes more on Ludy’s life and the Women’s Olympics as well as period photos.