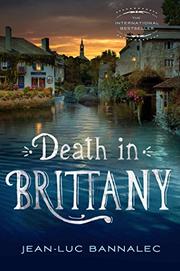 Commissaire Georges Dupin scratches his head over the death of a 91-year-old Breton hotelier.

It’s been two years and seven months since Dupin was “relocated” to a remote corner of Brittany. Even though locals still consider him a Parisian, he feels at home in Concarneau, where he sits each morning at the bar of the Amiral sipping coffee and gazing at the sea. One morning his peace is shattered by a call from Labat, the more annoying of his two inspectors, who informs him that Pierre-Louis Pennec, owner of the Central Hotel, has been found stabbed to death. Grumbling at the intrusion—he hasn’t even had time to buy his lottery ticket—Dupin hurries to Pont-Aven, an even more idyllic spot than Concarneau because it’s where the wooded river valley joins the rocky Breton coast. There, Dupin becomes more puzzled than put out. Who would kill an elderly man whose chief occupation was sipping the local lambig, an apple brandy even better than calvados, at his own bar at the end of each evening? As he interviews Pennec’s employees—wily Madame Lajoux, steady Madame Mendu, overwhelmed Madame Galez—Dupin’s confusion deepens. Even Pennec’s family, his son, Loic, and his half brother, André, sheds no light on the case. Gradually Dupin becomes convinced that the solution lies in the Central itself, which was home to the impressionist artists who worked at Pont-Aven. Solving this case isn’t paint-by-numbers: it takes ingenuity, determination, and a little help from Marie Morgane Cassel, a comely art historian from Brest.

Dupin’s debut, published first in Germany and then in Britain, holds the promise of more pleasant puzzlers from the scenic north of France.