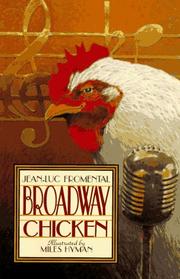 A good-natured story about Charlie, a dancing chicken, who is discovered on Canal Street, New York City, by an agent with dollar signs in his eyes. Soon Charlie conquers Broadway in a hit revue, flies to Hollywood and then—inevitably—ends up on the streets of New York, where he is found by his original owner and returned to his old home. Fromenthal's formulaic plot has several elegant touches, but center stage is Baker's able translation, all the more impressive because of the number of references, parodies, and chicken puns it contains, 90 percent of which are successful. Evoking a Chandler-esque New York and the Hollywood of Erich von Stroheim, the narrative is the dancing chicken in this book; the action and pictures—big pastel illustrations that are slightly scumbled, a little retro—are mere accompaniment. They just can't keep pace with the references in the animated, daring text. (Picture book. 5-9)