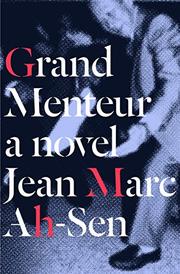 A young Mauritian immigrant attempts to dissect her father’s criminal past.

This debut novel by Ah-Sen, a Toronto writer who comes from a family of Mauritian winemakers, may tell an interesting tale, but the actual storytelling is so messy and unfocused that the style is distracting. We hear the story of Sergent Mayacou, a member of a secretive street gang called the Sous, through the eyes of his daughter between the years 1965 and 1980. Sergent is known by his cronies as “The Grand Menteur,” a designation which translates to “big liar,” while his comrades carry colorful nicknames like the Black Derwish, Ti Pourri, and Bowling Green. When a policeman friend of Sergent’s gives the daughter a codex laying out the mysterious workings of the Sous Gang, it gives her some insight into the nature of her painfully secretive father and her own tendencies toward crime and violence. Unfortunately, that revelation doesn’t do squat for the reader, since it’s never really revealed just what criminal activities this flamboyant band of misfits gets up to. The daughter ultimately ends up working at St. Alban’s, a homeless shelter in Toronto, where she seeks shelter for herself after years of grifting to get by. This tale is meant to shine a light on the unique plight of a specific group of immigrants, but there’s nothing compelling in its telling. “Yet wherefore the enduring survival of our derelict people?” the narrator bemoans late in the tale. “To what grace the raw power of these schemers? Where else but the many children, siblings, acquaintances, comrades willing to abet the happiness of their devoteds, kith and kin who comprised the enablers, sympathizers and even enemies. All points of discourse intersecting into a lightning array of action and inertia.” The story told here is culturally interesting with its melting pot of Mauritian mythology, British class influences, and the awkwardness of being a stranger in a strange land. It's too bad the writing that propels it is as twisty and hard to unravel as a Gordian knot.

A shambolic sort-of crime novel that flirts with absurdity but never finds its footing.