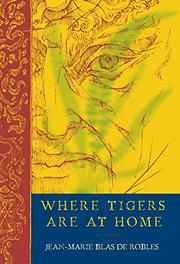 WHERE TIGERS ARE AT HOME

Athanasius Kircher is Eco territory, too. That is to say, in many interviews centering on his bibliophilia, Eco cites his vast collection of material written by and relating to the 17th-century Jesuit polymath. He presumably won’t mind that Blas de Roblès has appropriated his great hero and precursor, for there are no derivative notes in this inventive story, a sort of dream voyage into both present and past. Eléazard von Wogau, a French expat in Brazil, has been digging deep into the work of Kircher “with the same obsessiveness as some people collect bottles of whisky or cigarette packets long after they’ve stopped drinking or smoking.” As he does, his orderly life begins to dissolve ever more completely; his wife leaves him, his daughter disappears, and von Wogau himself begins to lose track of the dividing line between Kircher’s life and time and his own, Kircher’s biography steadily filling the space in which his own story might have been told. It’s a perfectly fitting setup, given, as Blas de Roblès notes, that in his day, Kircher faced accusations “of black magic by some simple or jealous people.” This densely woven tale is anything but simple, however, and the reader approaching it should be prepared for abundant shape-shifting and time-shifting. The payoff is not just the enjoyment of a craftily written historical novel with detective-story undertones, but also plenty of cocktail-party-worthy trivia: “Zoroaster was not a man but a title, the one given anyone who concerned himself with knowledge of the arcana & magic.” “[A]ccording to Servius, the word for elephant in the Punic language is ‘kaïsar.’ ” “A chicken, Caspar, a poulet, a pou-let! Don’t you get it?”

If you’re a fan of Foucault’s Pendulum and its kin, you’ll enjoy Blas de Roblès’ concoction.