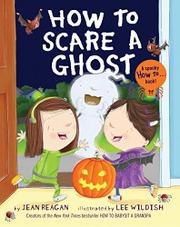 HOW TO SCARE A GHOST

From the How To... series

Reagan and Wildish continue their How to… series with this Halloween-themed title.

If you’ve ever had a hankering to scare a ghost, this handbook is what you need. In it, a pair of siblings shows readers “how to attract a ghost” (they like creepily carved pumpkins and glitter), identify a ghost (real ghosts “never, ever open doors”), and scare a ghost (making faces, telling scary stories). Also included is a warning not to go too far—a vacuum is over-the-top on the scary chart for ghosts. Once you’ve calmed your ghost again, it’s time to play (just not hide-and-seek or on a trampoline) and then decide on costumes for trick-or-treating. Your ghost will also need to learn Halloween etiquette (knocking instead of floating through doors). The title seems a little misleading considering only two spreads are dedicated to trying to scare a ghost, but the package as a whole is entertaining. Wildish’s digital cartoon illustrations are as bright as ever, and the brother and sister duo have especially expressive faces. Both are white-presenting, as are all the other characters except for some kids in the very last spread.

The tips garnered here could be used to scare just about anyone, and for those scared of ghosts, at least your carpets will be clean from all the vacuuming.