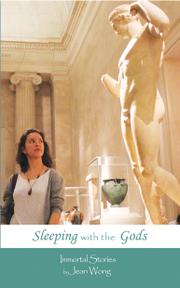 SLEEPING WITH THE GODS

A slim but passionate debut story collection about modern men and women having passionate affairs with human incarnations of ancient Greek gods.

In one of these nine stories, a woman meets a chiseled doctor, nicknamed Apollo, who loves archery. In others, a lucky man picks up Venus, a too-gorgeous-to-be-true hitchhiker, and an American woman abroad in Israel takes up with a handsome, dark lover named Pluto. The stories’ circumstances run the gamut from basic romance (a divorced woman on a beach has a one-night-stand with Mercury) to strange encounters (a troubled hiker meets Mars and discovers a brewing war between two schools of philosophy). As readers might expect, the god characters almost always wield the power in these stories’ relationships. These power plays are most satisfying when they aren’t solely about romance, as in “Hestia,” in which an old inventor lives out his last days with a submissive female-robot housewife, until things go awry. In “Angerona,” a meditation student is chosen to head a summer retreat, only to have the haunting Rona appear at the Zen center and threaten her serenity. Using such lesser-known gods (Angerona, for example, is the “[g]oddess of silence, secrecy, meditation, and mystery”) seems to give Wong license for more creative reinventions. Other stories rely on the mammoth legends that the gods carry around with them; without their powerful histories, they would be simple human characters—the lover who disappears, the bad boyfriend, the manipulative man in one’s life. Fortunately, their heritages as Greek gods or goddesses influence the stories without overburdening them. The collection also uses an impressive diversity of locations (Hawaii, small orchestras, mountain ranges). Readers may feel that narrators are overly similar—women who want to fall in love, men who want to get the girl—but the collection’s Greek-god gambit allows each story to take a good, dark turn.

A playful collection for romance readers who may wonder what the Greek gods are up to these days.

FATHOMS BETWEEN
by Laura Holt
Fiction

THE TOMB OF ZEUS
by Barbara Cleverly
Mystery

THE LADY OF SORROWS
by Anne Zouroudi
Indie