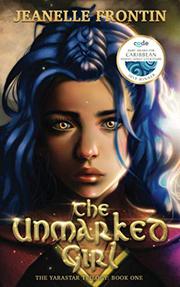 From the YaraStar Trilogy series, volume 1

A debut YA novel sees a teen girl fight for acceptance in a world of ingrained prejudice.

The planet Mira is home to two races—the sun-dwelling Photaks and the light-averse Skotads. Sixteen-year-old Yara is a Photak, but unlike the rest of her tribe, she has no birth markings. She was found as a baby in the Greens, a shadowy realm where no Photak can remain long without falling to Light Blindness. Yara can live in the light so she cannot be a Skotad. Yet she can never be a true Photak either. Taken reluctantly into the tribe, she has remained an outsider to be shunned, feared, and despised. Her adoptive parents love her, as do the younger children, but apart from them, only Kristos, the Chief’s son, truly accepts her. Yara is training to be a warrior with Kristos. Driven by the need to prove herself, she has become second to none in both the Photak fighting techniques and her own secretly developed style that is “notoriously difficult to predict” (“The offbeat moves came with their own rhythm, and from an outsider’s perspective, it looked like a dangerous, deadly dance”). On the Day of the Calling, Yara is chosen from all of the graduating trainees to defend the tribe in a ritual combat known as the inner fight. It’s her proudest moment, yet even in victory she faces disaster. For, unbeknown to Yara, her secret style mirrors that of the Skotads. Suddenly all of the tribe’s doubts come flooding back. With even Kristos now having second thoughts about her, Yara flees into the Greens—and meets a Skotad hunter who makes her question everything she’s been taught to believe. Frontin writes in the third person, mostly from Yara’s point of view, and quickly constructs an effortless blend of SF scenario, social allegory, and YA coming-of-age adventure. The prose is simple but effective, and the dialogue functional (although some of the monologues are a bit strained). But it is through characterization that the story soars. The plot spirals upward through broadly predictable yet still personal and distinctive patterns on the back of its character moments. As the first installment of a trilogy, the book lacks closure. Nevertheless, Frontin establishes Yara as a protagonist to follow and herself as an author to watch.

An engrossing SF/fantasy that breathes new life into old tropes.