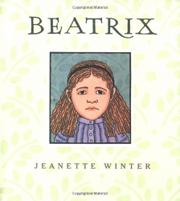 Various Episodes from the Life of Beatrix Potter

Winter follows up Emily Dickinson’s Letters to the World (p. 111) with a similarly evocative character portrait, pairing small, formal, closely-framed portraits of Beatrix Potter—at various ages, and usually in the company of small animals, as she so often was—with a first person narrative into which she folds Potter’s own words (set off in italics). The general tone is grave, often melancholy: “No one has time for me. I talk to the birds, who have the time.” Reflecting the loneliness of her childhood, Potter’s face is the only human one to be seen (with a single, late exception), and an occasional slight smile is the only outward sign of her inner pleasure at drawing, photographing, or just being with her many animal friends. Winter traces Potter’s burgeoning interest in observing and recording the natural world, covers the genesis of The Tale of Peter Rabbit, and closes with a “happily-ever-after” image of rabbits and fairies dancing in the dooryard of the farm where Potter spent her last decades. “I live so much out of the world,” she ruefully averred, but, just as her works have helped to connect generations of children to the natural one, so will this diminutive keepsake bring her private one into focus. (Picture book/biography. 7-9)