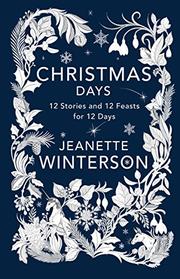 Ghosts, fairies, self-revelation, and friendly seasonal recipes give this collection a potentially wide-ranging appeal for readers as well as gift shoppers.

Winterson (The Gap of Time, 2015, etc.), the versatile British writer, has gathered 12 Yule-themed stories in a book laced with bits of autobiography both in the introduction—a handy guide to the history of Christmas—and in the dishes she describes after each tale. She is especially good with the supernatural, using eerie and magical elements in ways that hark back to Poe and Dickens. In “Spirit of Christmas,” a child trapped in “BUYBUYBABY, the world’s biggest department store,” helps a couple shed their materialism. “Christmas in New York” has an O. Henry feel as its hero discovers the explanations behind the magic that cures his misanthropy. Apparitions, strange noises, a madman, a kitchen knife, and a Stephen King–ish turn near the end—all these make “Dark Christmas” very dark indeed. “The Snowmama” brings some entertaining playfulness and silly puns (soul becomes Snowl) to the living-snowman idea. “The Silver Frog,” with suggestions of Oliver Twist and Roald Dahl’s Matilda, arranges a plague of magic silver frogs to deal with the meanie heading an orphanage. The story stands in counterpoint to the author’s laconic “I am adopted and it didn’t go well.” Winterson’s prose is often witty and sometimes lyrical, as in this description of Bethlehem before the first Christmas in the quite wonderful “The Lion, the Unicorn and Me”: “a musty, rusty, fusty pudding of a town…its people cussed and blustering.” The recipes seem doable and appetizing and come with intriguing glimpses of the writer, her friends, and their Christmas rituals.

Spooky, inventive, funny, maybe a tad didactic or cloying here and there, Winterson’s mixed bag of fictional treats has a 19th-century charm much needed in the grim 21st.