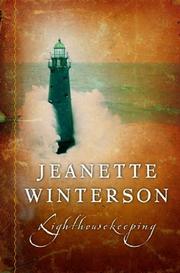 “The continuous narrative of existence is a lie . . . there are lit-up moments, and the rest is dark.” Winterson’s latest is all about light and dark, love and its absence.

The British author gives us two lives from two centuries. A 19th-century man travels from light into darkness; a 20th-century girl travels, stumblingly, from darkness into light. Silver, the girl, lives with her mother in Salts, on Scotland’s northwestern coast, sailor father long gone. When Silver is ten, in 1969, a mighty wind blows her mother into oblivion, and Silver is taken in by Pew, the lighthouse keeper, as his apprentice. Pew is blind but has a good heart, and his storytelling saves Silver from despair. The tale concerns the lighthouse, its founder, wealthy Bristol merchant Josiah Dark, and his son, Babel, who in 1848 seemed set to marry his pretty girlfriend Molly. That story comes to us in fragments, interleaved with Silver’s. Babel’s dark is of his own making when, suspecting, wrongly, that Molly has another lover, he punishes her with blows, then enters the clergy and a loveless marriage in far distant Silts. The moral is simple: “Never doubt the one you love.” There will be flashes of light in Babel’s later life before the dark closes in for good. Meanwhile, poor Silver’s life plunges into dark again; Pew’s love had sustained her, but now the lighthouse is automated and he vanishes. Silver goes south, begins to steal, has a breakdown. Much later, on a Greek island, she finds true love (her lover is a woman, but that’s secondary). The novel, gloriously edgy at the start (there’s a schoolteacher guaranteed to freeze your blood), now settles into the groove of a generic pastoral idyll, and the writing suffers. Please notice, though, that Silver’s lover has Pew’s long fingers: all the lives here are connected, and the nameless joins the circle that binds Babel and Pew and Silver.