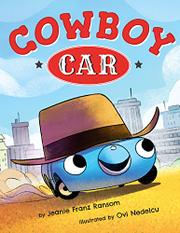 An urban auto finds fulfillment in the not-so-wild west.

Little Car is a blue car with big googly eyes and an expressive mouth. He has grown up on crowded city streets full of noise and traffic, but the TV screen has introduced him to another world—that of cowboys and wide, open spaces. Leaving his traditional parents (a father who sees his future as a cab and a mother who wants him to be a family car), he fills his trunk, leaves the tall buildings behind, and sets out on the open road. A somewhat puzzled man sells him a “fifty-gallon hat” (that, mystifyingly, he has on top of his house), and a cowboy at a ranch decides to give him a chance even though Little Car cannot ride a horse. Predictably, there are some jobs that a car cannot do and some that he can do by adapting his particular skills or mechanical assets. At the end of the day, he happily performs a “brake dance.” The climax of the tale takes place at a rodeo where Little Car proves that he has both the means and the mettle to save the day. Nedelcu’s mixed-media artwork reflects his background working in animation. Cartoon illustrations fill the busy pages with angular-faced livestock and humans, some white and some of color.