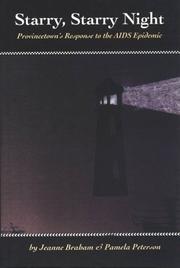 Provincetown's Response to the AIDS Epidemic

Like panels in the famous AIDS quilt, but restricted in scope to one small town, these interviews with residents of Provincetown, Mass., tell yet more stories of those afflicted by HIV. Braham, a writer, and Peterson, a psychologist, conducted the interviews over the course of five separate visits they made to Provincetown in 1996. Those interviewed include local nurses, counselors, clergy, social-service administrators, and volunteers. Among the mix of men and women interviewed, many are HIV-positive. What distinguishes this social-psychological account of AIDS from others are the particular features of Provincetown: its small size (permanent population of 3,300), large percentage of gay and lesbian residents, and stunning geography. The authors set the personal interviews with the HIV-infected and their caretakers against the backdrop of the town’s natural land- and seascapes, which alternately both alarm and calm the human spirit. Indicated, but not elaborated, are conflicts between different segments of the HIV-affected community over philosophies and politics of health care, and between recently arrived, relatively affluent gay men and older, often poorer residents. Though every story of battering by AIDS merits telling, the authors’ claims for the “extraordinary . . . communal response to the crisis” of AIDS in Provincetown, and the “astonishing degree of trust” they, as interviewers, received, will strike seasoned AIDS workers as grandiose. In the inverse universe of AIDS, the astonishing and extraordinary come to set the norm, whether for good or ill. In light of that, the authors’ tone could be less self-congratulatory, and the reaching for weighty metaphors less labored. Must a beach setting for cremation ceremonies be described as “gilded with ashes,” or a star-lit night as “the skin of solitude”? AIDS weighs enough already—please, dear authors, lighten up! The heavy-handed touch of the writing notwithstanding, this book does its part to meet the persisting need for both memorials and tributes to all affected by HIV.