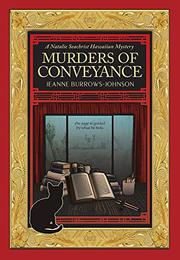 In this third entry of a mystery series, a woman’s latest vision seems to be an unsolved, decades-old murder that links to a present-day homicide.

Freelance journalist Natalie Seachrist is excited about the upcoming First Annual Aloha Scavenger Hunt in Honolulu. It’s not far from her Lanikai home, but this is her first vacation with her boyfriend, Keoni Hewitt, a retired homicide detective. Unfortunately, mere days into the weeklong event, cops discover a body in the hallway of Natalie and Keoni’s hotel. The crime scene resembles Natalie’s recent vision. As it was her first vision in months, she initially dismissed it, believing the black-and-white images were her memory of an old film noir. Despite similarities between the recent murder and Natalie’s vision, the latter was clearly from “an earlier era.” The cop working the present-day case, Lt. John Dias, Keoni’s old partner, has little evidence on the new homicide. But as he’s aware of Natalie’s ability, he encourages her to look into the mysterious murder of yesteryear even if she’s not part of the official probe. Natalie tries connecting the two crimes by identifying the earlier victim as well as the hotel from her vision. And notwithstanding the decades separating the murders, there’s a possibility of a solitary killer. Burrows-Johnson’s (Murder on Mokulua Drive, 2018, etc.) protagonist, as in preceding novels, is an accomplished sleuth. Her visions may spark an investigation, but Natalie’s research skills, stemming from her days in travel journalism, are what lead her to answers. The author’s bountiful details explore Hawaii’s history and culture, as scavenger hunt clues direct Natalie and Keoni to historical landmarks and the inquiry includes Chinatown in Honolulu. Though Burrows-Johnson tends to linger on descriptions of Hawaii’s food and handsome locales, this tactic meshes with Natalie’s investigative approach. The protagonist’s pace, for example, is leisurely but never boring, as she consistently tracks down and pieces together evidence. Nevertheless, though the case reaches a resolution, questions regarding the culprit’s specific motive and method remain.

A whodunit as smart and engrossing as the unlikely gumshoe.