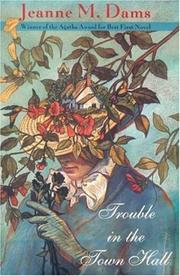 TROUBLE IN THE TOWN HALL

Widow Dorothy Martin, a transplanted American and surely the most aggressive of the current crop of village nosybodies (The Body in the Transept, 1995), lives in the village of Sherebury. She has the requisite cats, a part-time job volunteering at the Cathedral bookstore, and a civilized suitor—Chief Constable Alan Nesbitt. One day, by chance, Dorothy and the Cockney cleaning woman Ada Finch discover a body in a broom closet in the venerable, long disused Town Hall. City Commissioner and land developer Archibald Pettifer was also in the building. Pettifer is a longtime supporter of local business interests and a source of considerable irritation to village preservationists like Barbara Dean. The body is eventually identified as that of one Jack Jenkins, a small-time crook from Sheffield. Pettifer has an alibi provided by builder Herbert Benson, but his fragile wife Clarice, who works with Dorothy in the bookshop, appears devastated by the killing. The police are getting nowhere; Alan is consumed by preparations for an upcoming royal visit to Sherebury, but Dorothy, despite her leaking roof and frustrated efforts to rebuild her house, finds time to cross-examine anyone even marginally involved as she looks for a connection to Sheffield and uncovers an old building scandal. A second killing, the royal reception, and a crucial bit of evidence bring her search to a melodramatic end. The irritation raised by Dorothy's unalloyed chutzpa is partly soothed by Ada Finch's warm, down-to-earth persona. The clumsiness of the plot is unredeemed, but fans of the cozy genre will enjoy the village scene and its stalwart residents.