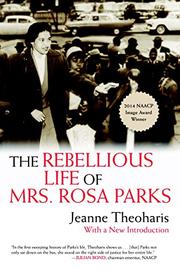 Theoharis (Political Science/Brooklyn Coll.; co-author: Not Working: Latina Immigrants, Low-Wage Jobs, and the Failure of Welfare, 2006, etc.) has discovered the soul of Rosa Parks (1913–2005), and it’s not that of a docile, middle-age seamstress.

The author successfully goes “behind the icon of Rosa Parks to excavate and examine the scope of her political life.” Parks learned to stand up for her rights as a child; she never backed down from black or white, rich or poor when she knew she was right. She began working for civil rights early in her life and was the first secretary of the Montgomery NAACP in 1947. She also wasn’t the first to refuse to relinquish her seat on the bus, but the strength of her character and a push too far by the local police made her the poster child for the struggle. Her arrest was the impetus for what began as a one-day Montgomery Bus Boycott. That, in turn, united the black population, which had been deeply divided by class and education. While her refusal wasn’t planned in advance, the bus boycott was no spontaneous action. Parks continued to work for equality after she and her husband moved to Detroit, where racism was as bad, if not worse, as that in the South. How Theoharis learned the true nature of this woman is a story in itself. Parks always stood in the background, never volunteered information about herself and eschewed fame. There were no letters to consult; even her autobiography exposed little of the woman’s personality. She hid her light under a bushel, and it has taken an astute author to find the real Parks.

Even though her refusal to give up her bus seat sparked a revolution, Rosa Parks was no accidental heroine. She was born to it, and Theoharis ably shows us how and why.