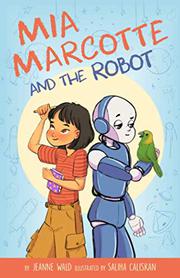 MIA MARCOTTE AND THE ROBOT

In this debut children’s chapter book, a girl who dreams of being the first astronaut on Mars gets help for her science fair project from a robot.

Although young Mia Marcotte loves to imagine exploring space, she doesn’t enjoy her science class, where her experiments often go wrong. She doesn’t feel inspired by the third grade science fair until she learns that the best projects “will go on a special field trip…to the space center!” It’s a field trip that the would-be astronaut doesn’t want to miss, so she tries to think of a good project in the three days she has left. Her first attempt doesn’t go well, and Mia’s “architect dad and accountant mom” may not be much help. But maybe her Aunt Serena will; she’s coming for a visit, and she’s an engineer. Serena’s boxes arrive first—and from one of them, a boy-sized intelligent robot emerges, calling himself Aizek. With his help, Mia builds a telescope modeled on Galileo’s. At the science fair, the project has some hitches, but Mia’s inspired by a teenage girl who’s a trainee astronaut. Wondering how such a young girl succeeded, Mia realizes “the simple answer. That girl persisted!” Mia, too, persists, fixing her telescope and achieving her goal. In her debut, Wald tells an amusing story with a series of comic predicaments and a wry narrative voice, as when Mia’s “forehead wrinkled as she tried to find a solution. But the more she tried, the messier her head became.” Aizek’s name appears to be a joking reference to author Isaac Asimov and his famous Three Laws of Robotics. But the story also offers serious messages about not giving up and the collective nature of success; Mia’s parrot and next-door neighbor contribute to her project, for example, and Mia helps Aizek develop imagination. Debut illustrator Caliskan’s black-and-white images are simple but varied and expressive, and depict diverse characters.

A well-told comic tale with a feminist theme.