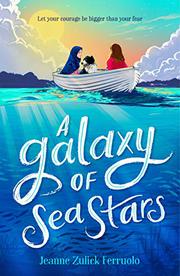 A GALAXY OF SEA STARS

She and her family have moved out of the cottage she grew up in. Her mother has spent the summer on Block Island instead of at home with Izzy. Her father has recently returned from military service in Afghanistan partially paralyzed and traumatized. The only people she can count on are Zelda and Piper, her best friends since kindergarten—that is, until the Haidary family moves into the upstairs apartment. At first, Izzy resents the new guests from Afghanistan even though she knows she should be grateful that Dr. Haidary saved her father’s life. But despite her initial resistance (which manifests at times as racism), as Izzy gets to know Sitara, the Haidarys’ daughter, she starts to question whether Zelda and Piper really are her friends for forever—and whether she has the courage to stand up for Sitara against the people she loves. Ferruolo weaves a rich setting, fully immersing readers in the largely white, coastal town of Seabury, Rhode Island. Disappointingly, the story resolves when Izzy convinces her classmates to accept Sitara by revealing the Haidarys’ past as American allies, a position that put them in so much danger that they had to leave home. The idea that Sitara should be embraced only because her family supported America, rather than simply because she is a human being, significantly undermines the purported message of tolerance for all.