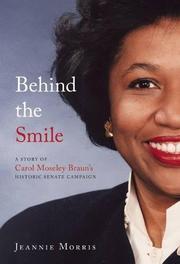 A close-up look at the senatorial campaign of a trailblazing black female politician.

Morris (Brian Piccolo: A Short Season, 1971), the first woman to win the Ring Lardner Award for sports journalism, followed the 1992 campaign of Braun, the first black woman to become a U.S. senator. The author introduces the theme of sexual harassment with a look back at Braun’s angry comments on a PBS show about the hearings that preceded the confirmation of Clarence Thomas as a Supreme Court justice. When Braun announced her candidacy, Morris, impressed, asked to follow her campaign and document it for a book. Braun agreed, and Morris kept a journal of the experience. This book is based on her journal, quotes from her interviews with the campaign staff, long statements by Braun, letters, newspaper articles, and even gossip columns from Chicago newspapers. Morris describes Braun’s campaign manager, Kgosie Matthews, to whom she could not get close, as “meticulously mannered and erudite—or rude and contemptuous.” It soon became apparent that he was not just Braun’s campaign manager, but also her lover. When staff members charged him with sexual harassment, Braun chose to reject them in order to protect the man she trusted and saw as her protector. Though she was enraged by Braun’s self-destructive behavior, Morris continued to see her as a phenomenal person with great courage and potential, and she continued to work on this book. When Braun made it clear she did not want it published, Morris concurred, not wanting to damage Braun’s career. Her decision to go public at this late date is unclear, but perhaps it is clarified by her describing this as “a cautionary tale that screams ‘hazard’ where passion and politics intersect.”

An overly detailed and dated account of the ups and downs of an Illinois political campaign, possibly of interest to black female Chicagoans, political groupies of any ilk, or feminist book clubs.