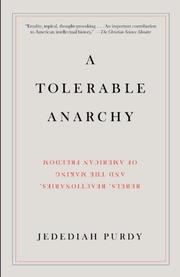 Rebels, Reactionaries, and the Making of American Freedom

The Founders’ call to the spirit of liberty, puzzling to Edmund Burke and derided by Samuel Johnson, was patently hypocritical in light of the institution of slavery, writes Purdy (Law/Duke Univ.; Being America, 2003, etc.). The Declaration of Independence and the Constitution, both central to our canon of liberty, were thus flawed, but nevertheless achievements and prototypes that made freedom an imperative. Purdy’s short primer traces the evolution of constructive anarchy—our national tradition—through the special contributions of Frederick Douglass, Ralph Waldo Emerson and Oliver Wendell Holmes. He parses the language of Presidents Lincoln, Wilson, both Roosevelts and both Bushes as well the preaching of ecclesiastics from the Puritans and Deists to the purpose-driven Rick Warren. He touches on the dignity of free labor and utopian common sense. American political discourse, founded on the assumption that people are capable of self-government, includes notions of responsibility, service and character, writes the author. When George W. Bush asserted that the Iraq invasion would succeed because “God has planted in every heart the desire to live in freedom,” it was “a humane and hopeful idea,” but it was also “dangerously close to willful naïveté.” It’s too bad that Purdy’s detailed take on economics doesn’t reckon with the present unhappy situation. Readers will surely regret not having his thoughts on the effects of Ayn Rand–like libertarianism, evident in the ideas of Alan Greenspan, and its role in the dismantling of government regulation of the financial markets.

For a sapient citizenry and a new administration, a graduate-level seminar on a civic philosophy that reminds us, “Freedom is not just where you end up but also how you get there.”