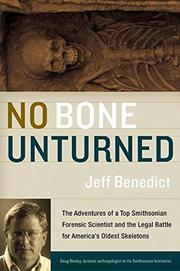 Once you know how to read them, skeletons are caches of knowledge, and no one is better at discerning their stories than Owsley, curator at the Smithsonian National Museum of Natural History. Here, Benedict follows Owsley as he performs his fascinating, if at times grisly, labors examining the remains of Branch Davidian members burned at Waco, or sorting through the bone remnants of two Americans journalists murdered in Guatemala. It comes as no surprise that Owsley would become embroiled in the debate regarding Native American rights to remains, and much of this work is given to the dispute over the Kennebeck Man, an ancient skeleton of which the Umatilla and Yakima people wanted control, while Owsley countered that it was not of Native American ancestry. All the feints and obfuscations, legal dilly-dallying, and toadyism keep Benedict's extensive coverage of the case from becoming a legal thriller and almost torpedo the more intriguing story of Owsley's work, but the controversy does highlight the difficult choices to be made between scientific understanding and the rights of Native Americans: you can't know whether the remains are native until you have tampered with the evidence beyond what one culture deems decent and responsible. Benedict does a good job walking readers through Owsley at work, explaining how he reached various conclusions given the evidence, but there are too many times when the writer simply goes gaga over the pathologist’s talent (“his analytic faculties immediately became razor sharp, his senses and emotions all directed toward accomplishing his mission”) or embraces Owsley's questionable opinions, such as putting the responsibility for the death of children at Waco solely on the shoulders of the Davidians, as if the FBI agents were innocent bystanders.

No need to sensationalize Owsley's story; the pathologist would have emerged an even more awesome figure without the superhero garb. (8-page b&w photo insert, not seen)