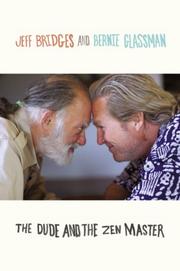 THE DUDE AND THE ZEN MASTER

by Jeff Bridges and Bernie Glassman

A rambling conversation on all things Zen between the mystic-minded movie star and his spiritual teacher.

As the title suggests, this book targets (and might most please) the ardent cult attracted to The Big Lebowski, the movie that gave Bridges (Pictures, 2006) his iconic role. He explains of the book’s genesis, “So…my friend Bernie Glassman says to me one day, ‘Did you know that the Dude in The Big Lebowski is considered by many Buddhists to be a Zen master?’ ” The two proceed to explore one of the movie’s signature lines, “The Dude abides,” from every possible perspective, punctuated by anecdotes from Bridges’ film career and personal life and spiritual sagacity from Glassman (Infinite Circle: Teachings in Zen, 2002, etc.). Perhaps the most revelatory is a close reading of “Row, Row, Row, Your Boat,” where even readers who have heard it thousands of times before will understand “gently,” “merrily” and “life is but a dream” with fresh ears. Some of the rest belabors the obvious, suffers from cliché and hippie vernacular, and even borders on self-parody. When Bridges talks about fan letters, most of which he doesn’t answer and then occasionally feels guilty, Glassman advises, “You need to befriend Jeff. It’s got nothing to do with the letters. You’ve got to befriend the fact that Jeff can only do so much….The Dude does not get angry with himself for all the things he’s not doing. He befriends the self.” Bridges makes it a point to distinguish himself from that role, though sometimes he wishes he could be more like the Dude. He writes things like, “Dig is beyond understand. I like digging where I am and what I’m doing, I like jamming with myself.”

May lead readers to plenty of better introductions to Zen. You dig?