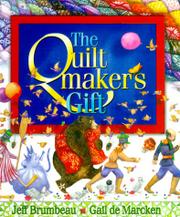 A sentimental tale overwhelmed by busy illustrations and rampant pedantry. A gifted quiltmaker who makes outstanding quilts never sells her wares, but gives them away to the poor. A greedy king so loves presents that he has two birthdays a year, and commands everyone in the kingdom to give him gifts. Everyone brings presents till the castle overflows; the king, still unhappy, locates the quiltmaker and directs her to make him a quilt. When she refuses he tries to feed her to a hungry bear, then to leave her on a tiny island, but each time the quiltmaker’s kindness results in her rescue. At last, the king agrees to a bargain; he will give away his many things, and the quiltmaker will sew him a quilt. He is soon poor, but happier than he’s ever been, and she fulfills her end of the bargain; they remain partners forever after, with her sewing the quilts and him giving them away. The illustrations are elaborate, filled with clues to quilt names. A note points to the 250 different quilt names hidden in the picture on the inside of the book jacket. (Picture book. 6-10)