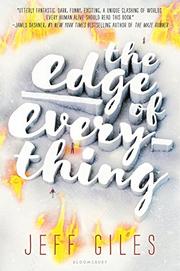 THE EDGE OF EVERYTHING

Opposite worlds collide in this supernatural tale of forbidden love and good-versus-evil when 17-year-old Zoe, who is still coping with the death of her father, crosses paths with X, a pale boy of the supernatural variety.

Zoe and X’s love affair is doomed from the start, because X is a prisoner from the Lowlands—a supernatural, hellish landscape—where he acts as a bounty hunter, collecting the souls of bad people on behalf of a mysterious higher power. With her witty dialogue and banter, Zoe is positioned as a funny and likable character, but X doesn’t have enough substance to set him apart from other brooding young men within the genre. In an apparent effort to charm teen readers, the book is brimming with pop-culture and social media references, and the frequent use of slang phrases (“dawg”; “true dat”) dates the novel and reads like a mockery of the teen experience. Zoe is described as having pale skin. Regent, a black Lowlands lord with “royal, African bearing” and “shining, ebony skin,” is the novel’s main character of color and fulfills the unfortunate “magical negro” trope. Meanwhile, Zoe’s best friend, Val—a lesbian—reads as a flat character.

In the end, this effort doesn’t do anything new for the paranormal-romance genre and falls short of the gripping and heart-stopping supernatural tale it promises.