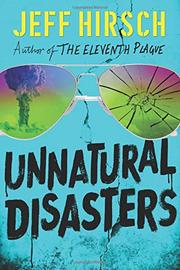 A story that feels ripped from the pages of a catastrophic future.

Living in a world of climate change and escalating international tension, high school horror-flick aficionado Lucy plays the typical teenager by going to prom with her boyfriend. Why plan for a future when the world is so in flux? The two lovebirds decide to travel the world post-graduation rather than following their peers to college. But prom night offers more excitement than anyone expected, and when tragedy strikes in Washington, D.C., the students retreat to their homes and families. With lines of communication interrupted, Lucy’s household lives in a state of uncertainty. The fascinating tale of Lucy’s absentee mother, a jailed political activist, is introduced as Lucy digs through boxes in the attic, but the story focuses on Lucy’s attempt to rejuvenate her love life and live an everyday existence. Horrifying for the way it makes readers imagine existential dread in a time of chaos, the novel ends by introducing a new disaster. A final shift toward hope results from the characters’ being forced to take community action. Most of the cast is assumed white, and there is some diversity in secondary characters, such as Lucy’s Greek/Egyptian friend and his family.

A brilliantly written tale of a town in crisis; while possibly too quiet and quotidian to move some, there is terror in picturing a mundane life in the midst of an apocalypse.