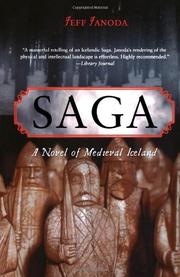 A Novel of Medieval Iceland

If the mob bosses of The Sopranos spoke Old Norse and wore chain mail, they would feel right at home in this absorbing historical melodrama.

In the harsh environs of Iceland’s Swan’s Fjord, circa 965, the inhabitants live by their wits. At the top of the heap are two rival chieftains, the intimidating warrior Arnkel and the cagey operator Snorri. Their power rests occasionally on the sword, but more fundamentally on their influence over their bands of followers, or Thingmen, whom they control through patronage, elaborate webs of favors and debts and their formal role in settling (for a fee) the many disputes that arise in Iceland’s intensely litigious society. Surrounding them–jockeying for position in a Machiavellian world of mead-hall conspiracies, double and triple crosses, surreptitious murders and poisoned gifts of honey–is a sprawling cast of characters, including Arnkel’s conscience-stricken chief henchman Thorgils, the sons of Thorbrand, battling Arnkel for their land, and honest farmer Ulfars and his wife Auln, tragically caught up in machinations they cannot fathom. In Iceland’s austere terrain, with its meager margin of agricultural subsistence, they struggle over the brute necessities of life: fish, cows, hay and, most of all, trees, which are worth their weight in gold. Debut novelist Janoda paints a richly textured portrait of Icelandic culture, from the daily routine of farm chores to the protocols of pagan ritual sacrifice. The intricate but well-paced narrative, based on a traditional Icelandic saga, moves grimly forward, brimming with multigenerational cycles of bloodshed and vengeance set against a backdrop of ghostly apparitions and elvish malevolence that symbolize the dark, tectonic forces of human greed and rage. Despite the archaic setting, Janoda manages to imbue his characters with believable psychologies and motivations.

A gripping recreation of an ancient genre.