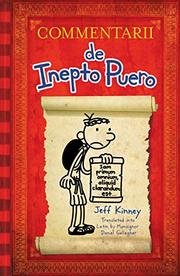 From the Diary of a Wimpy Kid series

The Latin version of Kinney’s Diary of a Wimpy Kid (translated by Vatican Latinist Gallagher), is an exploration of new form rather than new content, much like the Shakespearean version of Star Wars or the Klingon version of Hamlet.

Cicero would ask, “Cui bono?”: for whom is this a benefit? For readers who have soldiered through the phalanxes of Latin grammar, the works of Caesar, Catullus, and Virgil have traditionally been the prizes at the end of their odysseys. Is Kinney’s work also commensurate reward for their studies? The challenge is in finding readers whose Latin skills are up to Gallagher’s Latin prose (which is sophisticated) and whose humor appreciates the travails of middle school (which are many). The decision to omit macrons (an essential vowel accent in elementary Latin texts) aims the book squarely at experienced readers rather than young Latinists. Clever Latin neologisms abound for modern words like “video games,” “heavy metal music,” and “computer,” although the Latin is a mix of calques and pseudo-Latin words (“videolusuum,” “musicae metallicae gravis,” and “computatro”).

For most readers, this effort sits as a curio alongside other Latin versions of modern books, truly delighting only the rare readers who can both navigate the syntax of Latin and giggle at the “Tactus Casei” (“Cheese Touch”).