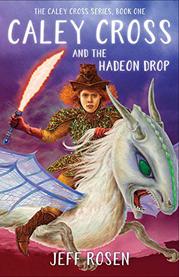 CALEY CROSS AND THE HADEON DROP

This debut middle-grade fantasy sees a neglected orphan returning to the magical kingdom of her birth to face a rising evil.

Thirteen-year-old Caley Cross is the oldest child at the Gunch Home for Wayward Waifs, where she is worked like a slave and kept starved and impoverished. Caley gets on with her life as best she can, but if ever her anger is roused, she dies. Her deaths are only temporary—she revives shortly afterward—but they are linked to an innate power that causes dead animals to come alive. One day, Caley’s resurrections bring her to the attention of a metal-winged crow, whereupon she is rescued from the orphanage and taken to Erinath, a realm beyond Earth. Caley, it transpires, is the lost daughter of Queen Catherine, who disappeared shortly after the girl was born and is thought to have been killed by the nefarious Olpheist. Returned to Castle Erinath (which grows like a tree and often shifts its rooms about), Caley must adjust to her royal status—and to the relentless enmity of Ithica Blight, the vain and petty princess she’s supplanted as next in line to the throne. Ithica’s cruelties aside, there is trouble brewing in the kingdom. Castle Erinath is sickening and Olpheist is rumored to have broken free of his prison. Can Caley and her new friends sort truth from lies and keep him from laying hands on the Hadeon Drop, the ultimate source of creation and destruction? In this wildly imaginative series opener, Rosen’s storytelling overflows with creative fancy, so much so that the strong Harry Potter resonances (cruelly treated chosen one, boarding school social dynamic, Quidditch-like Equidium teams) become an unfortunate distraction from the boundless parade of whimsical characters and fantastical new material. Caley’s adventure begins in a breathless rush before settling down and building steadily to a somewhat abrupt end (and the promise of a sequel). The author’s prose is easy to read, with clear descriptions, age-appropriate dialogue, and plenty of humor. While Ithica is over-the-top and Caley and Olpheist are little distinguished from default heroes and villains, all the other characters ooze originality. All told, young readers will thrill at the sparkle of enchantment.

A fun and fast-moving adventure giddy with ideas.