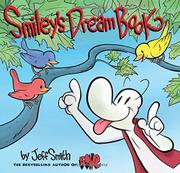 Smiley Bone flies with the birds in this picture-book outing for the character from Smith’s Bone graphic novels.

Smiley is taking a walk in the woods on a beautiful day. He listens to the birds singing, which makes him wonder how many there are. He counts the many-colored birds, each chirping musical notes the color of their plumage. By the time he reaches seven, Smiley is flying alongside the birds he’s counting. He stops counting after he hits 12 and just enjoys his flight with the flock (some of whom have hats or scarves on). Then a bird of prey attacks, terrifying the songbirds. Smiley gets up in the attacker’s beak…and literally scares the poo out of it. His bird friends thank him, and he counts back down to one only to find himself snoozing under a tree. He realizes it’s all been a dream…but a good one, the kind that makes even the scary ones “worth it.” Smith applies graphic-novel conventions to this picture book; nearly every page is framed like a comic panel, and the limited dialogue is all presented in dialogue balloons. Little readers unfamiliar with the Bone comics won’t know that this fantasy character isn’t supposed to fly, and there really isn’t much of a story, but the gentle message may be good as bibliotherapy for children who have nightmares, and the bright colors are inviting.

Best for children of Bone fans.