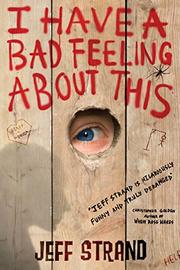 I HAVE A BAD FEELING ABOUT THIS

Survival camp? How can you not have bad feelings about that?

Sixteen-year-old nerd (or geek, but not dork) Henry Lambert has no desire to go to Strongwoods Survival Camp. His father thinks it might help Henry man up and free him of some of his odd phobias. Randy, Henry’s best friend since kindergarten, is excited at the prospect of going thanks to the camp’s promotional YouTube video, so Henry relents. When they arrive at the shabby camp in the middle of nowhere and meet the possibly insane counselor (and only staff member), Max, Henry’s bad feelings multiply. Max tries to train his five campers with a combination of carrot and stick, but the boys are not athletes, let alone survivalists. When a trio of gangsters drops in on the camp Games to try to collect the debt owed by the owner, the boys suddenly have to put their skills to the test. Too bad they don’t have any—at all. Strand’s summer-camp farce is peopled with sarcastic losers who’re chatty and wry. It’s often funny, and the gags turn in unexpected directions and would do Saturday Night Live skits proud. However, the story’s flow is hampered by an unnecessary and completely unfunny frame that takes place during the premier of the movie the boys make of their experience. The repeated intrusions bring the narrative to a screeching halt.

Without that frame, this would have been a fine addition to the wacked-out summer-camp subgenre.