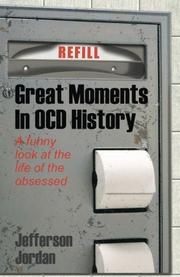 A humorous look at life with OCD

Obsessive-compulsive disorder is no laughing matter. Unless laughter is your best defense against it.

In this slim work of nonfiction, debut writer Jordan, a longtime OCD sufferer, is by turns humorous, snarky, angry and thoughtful. This is a personal and anecdotal account of what OCD is and what it’s like to suffer from it 24/7. The book has an interesting and telling provenance. In late 2012, Jordan was at the end of his rope: dead-end job, junker car and few friends. So his friend Tony—we should all have friends like Tony—challenged him to write a book in 30 days. This is that book. In a work like this, voice is all-important. Who is this guy who has buttonholed us? Well, he’s a chatty and good, accessible writer when he’s on his game. He is likable; the reader will probably root for him. Each chapter is a sort of running commentary on the disease itself, the mental health system, therapies, others’ reactions and so forth. And each chapter ends with a particular anecdote under the heading “Great Moment in OCD History.” Some of these are horrifying (from the OCD sufferer’s point of view), but most also show the sufferer’s courage and mordant humor. The book is somewhat repetitious. We are all aware of the OCD obsession with germs, real and imagined, and compulsive hand-washing. For Jordan, public restrooms are like Dante’s lowest circle of hell. But after the third or fourth example, the reader more than gets it. Jordan, a committed Christian, has struggled to come to terms with OCD and with God. Is he angry? Well, he has been. But God, he is told, is strong enough to take a lot of abuse. And then he says, “Maybe I needed to be broken....Being broken sucks, there is no getting around it, but once you are broken, you can be rebuilt into something better.”

Tons of tragicomic wisdom packed into a short memoir.