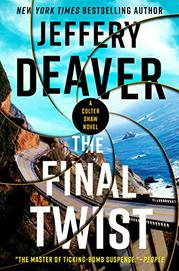 A third case—make that flock of cases—for Colter Shaw, who finds lost people for the reward money.

Soon after Shaw finds evidence that, shortly before his death years ago, his father, Ashton, had been on the trail of some kind of damning information the late BlackBridge Corporate Solutions researcher Amos Gahl had gotten on his employer, his long-estranged brother, Russell Shaw, interrupts his own clandestine undercover work and turns up to help Shaw find that information and bring down BlackBridge. Their enemies—BlackBridge founder and CEO Ian Helms, his fixer Ebbitt Droon, grandmotherly killer Irena Braxton, and all the company’s vast resources—are potent, but not nearly as potent as the array of switchbacks Shaw and his brother will have to negotiate as they search for the mysterious Endgame Sanction of 1906. The company’s deep-laid malfeasance is closely entangled with the schemes of BlackBridge client Jonathan Stuart Devereux, head of Banyan Tree Holdings. Along the way, Shaw finds evidence that the family of someone identified only as “SP” is slated for extermination and adds saving them to his to-do list. And undeterred by the firepower arrayed against him, he decides to take on the more traditional job of finding recovering addict Tessy Vasquez for the piddling reward her mother, undocumented, overworked Maria Vasquez, is offering, and his search naturally gets tangled up with everything else. The caseload is every bit as miscellaneous as it sounds, but Deaver spices his kitchen sink with so many red herrings, misleading clues, bait-and-switches, and double-fakes that you’ll be hard-pressed to identify that final twist.

Enough surprises, complications, and deceptions for three novels and half a dozen short stories.