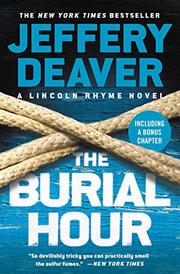 Quadriplegic criminalist Lincoln Rhyme (The Steel Kiss, 2016, etc.) celebrates his nuptials by matching wits with perhaps the most dull-witted of his many opponents: a serial kidnapper whose crimes seem as toothless as they are motiveless.

The first victim, Robert Ellis, is a San Jose media buyer snatched from the streets of New York under the eyes of an unusually perceptive 9-year-old, who not only sees the abduction, but recovers an important piece of evidence—a tiny hangman’s noose—in time to set Rhyme and his allies on the trail to rescue Ellis before he can be properly hanged. A similar noose found at the site where a second victim, Libyan refugee Ali Maziq, was kidnapped outside Naples causes Rhyme to move the honeymoon celebrating his upcoming marriage to his longtime colleague NYPD Detective Amelia Sachs to Italy, where he arrives just in time to watch the first of many tangles between imperious prosecutor Dante Spiro and Ercole Benelli, the enterprising but inexperienced Forestry Corps officer who’s been seconded to the Naples Questura at the request of Detective Inspector Massimo Rossi, who finds the young man keener and quicker than the Carabinieri officer charged with the investigation. From that point on it’s all forensics, all the time, in Rhyme’s quest to catch a culprit calling himself The Composer before he succeeds in killing one of the people he snatches apparently for no better reason than to record the sounds they make. Although hard-core fans of Patricia Cornwell and Kathy Reichs will be duly impressed by Rhyme’s death-on-rats analysis of trace evidence, other readers will miss more sharply distinguished characters, a more memorable villain, and a more coherent plot—particularly once the case takes on aspects of international terrorism and Deaver veers more sharply than convincingly into Homeland territory.

As even Lord Peter Wimsey demonstrated, a detective’s entitled to a break during his honeymoon. Expect Rhyme and Company to be back to fighting strength by next year.