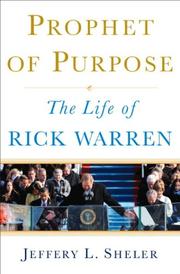 The Life of Rick Warren

Uncritical but detailed biography of one of America’s most influential living religious figures.

U.S. News & World Report contributing editor Sheler (Is the Bible True?, 1999) provides a needed overview of the life of Rick Warren, founder of the 25,000-member Saddleback Church and author of the mega-seller The Purpose Driven Life (2002). The author’s near-hagiography glosses over most of the criticisms of Warren, but the book is accessible and provides important background for anyone with an interest in the preacher. Beginning with a historical discussion of Warren’s Southern Baptist upbringing, Sheler covers Warren’s parentage and adolescence. An accomplished teenage preacher, Warren was ordained at age 21. After completing a seminary degree, he and his wife moved to Southern California to start a new church from scratch. Warren had carefully studied the urban American landscape for places to begin ministry and settled on the Saddleback Valley area of Orange County. Beginning with a small Bible study group he cobbled together upon arriving, he launched a church in 1980 that would reach an attendance of 200 in less than a year. As the Saddleback Church grew by the thousands during the ensuing two decades, so did Warren’s role in the American Evangelical landscape. From his work leading ministerial conferences on evangelism came the bestselling book The Purpose Driven Church, followed by The Purpose Driven Life, a publishing success of the first order. This new renown drove Warren into unexpected circles of influence, exemplified by such experiences as receiving a phone call from Benjamin Netanyahu while waiting in line at Starbucks, or delivering the invocation for Barack Obama’s inauguration. In the final chapters of the book, Sheler looks at Warren’s struggle to stay focused on ministry and to refocus in light of his success and fame.

Evangelicals will be delighted, and most readers will at least be intrigued.