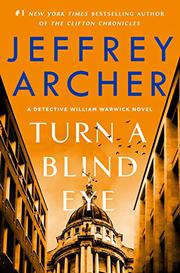 William Warwick, newly promoted to Inspector Warwick, finds that putting away the drug lord he caught in Hidden in Plain Sight (2020) may not be as easy as he thought.

The good news is that tea importer Assem Rashidi, who imports a lot more than tea, is finally in custody and that nefarious financier Miles Faulkner is on the run. The bad news is that no one can find any trace of Faulkner’s ill-gotten fortune, including his fabulous collection of old-master paintings, and that Rashidi’s engaged Booth Watson, Queen’s Counsel, as his barrister. What chance does oleaginous Watson have against Crown Prosecutor Sir Julian Warwick, William’s father, and his junior, William’s sister Grace, with William himself as star witness? Quite a good chance, as it turns out in the trial that unfolds over much of this tale’s first half. The complications that follow—WPC Nicola Bailey, assigned to watch over DS Jerry Summers, a suspected underworld contact, gets so close to her target that they end up in bed, and Faulkner survives reports of his death and cremation to attend his own funeral, the beneficiary of some plastic surgery so expert that the only attendee to give him a second glance is Booth Watson, QC—are both more shapeless and more flatly incredible. The swirl of criminal intrigue culminates in a second trial when William finally swoops down on Jerry Summers, but this one, even though the legal talent on both sides is exactly the same, is a lot less compelling than the first. Archer, who makes every page readable even when the events he’s recounting are least credible, provides a nice coda concerning one of those old masters.

A sad case of sequelitis. Next year?