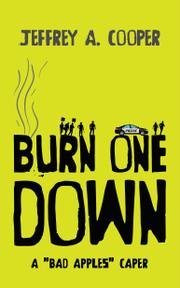 by Jeffrey A. Cooper


“How hard could it be to steal from a bunch of potheads?” Thief Jack Apple finds out when he enters into a suspicious partnership to rob a medical marijuana dispensary in Cooper’s (How to Steal a Truck Full of Nickels, 2015) novel.

One of the most irresistible crime-fiction tropes is the criminal who wants to go straight but gets drawn in for one last score. But the sooner Jack puts his criminal life behind him, the better; even he has doubts that he’s “the master thief he once thought he was” due to a botched heist that opens the book. In it, he attempts to rob a home in which the resident, his violent goons, and some vicious dogs are present. On this fateful night, he also meets Diane Thomas, a 20-something femme fatale with an intriguing proposition. She wants him to help her rob a medical marijuana dispensary for a six-figure payoff; she stole the idea from her estranged husband. Jack puts up token resistance, but Diane is nothing if not persuasive. Before readers can say Dog Day Afternoon, the heist goes awry and a hostage situation ensues. Soon, Jack is dealing with a tough-talking sheriff facing re-election, a restless mob, activists eager to exploit the explosive situation, and competing TV news anchors with their own agendas. By the time the dispensary owner tells Jack, “You have no idea what a lousy idea this is, do you?” it’s too late. Overall, Cooper gives Jack some of the best lines in this brisk book (“Robbery is easy. Getting away with it is the hard part”), but Diane, who’s painted as a trigger-happy and not entirely trustworthy character (“I wasn’t lying. I just wasn’t telling you everything”), gives as good as she gets. Less convincing are the news media and hostages, who are more broadly and unconvincingly drawn. There’s a nifty, sequel-ready climax, although the novel’s epilogue, which ties up some of the less engaging plot threads, takes some of the wind out of the story’s sails.

This little ditty about Jack and Diane is a fast-paced read that finds a few new wrinkles in a familiar genre.