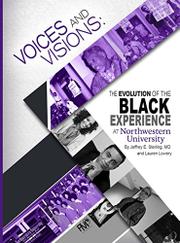 The Evolution of the Black Experience at Northwestern University

A wide-ranging history of the evolving experience of African-Americans at Northwestern University.

While historians have often neglected to record the accomplishments of African-Americans, there has always been an alternative fount of information on the black experience in America: a vibrant oral tradition. Debut author Lowery and Sterling (Behind the Curtain, 2016) aim to capture the lessons of that tradition in writing by presenting the history of the black experience at Northwestern University through a series of interviews with its notable black graduates. They cover a broad swath of historical terrain—campus life, the experience of the black athlete, the tumultuous emergence of black activism, and the transformation of the institution from one that once excluded blacks from living on campus to one that makes a concerted effort to welcome them. The authors both movingly and meticulously depict that transformation. In 1902, Isabella Ellis’ first roommate protested sharing living quarters with a black roommate, and in the same year, Northwestern officially adopted a policy of housing segregation, not overturned until 1953. Stanley L. Hill, another graduate, was surprised to find the campus a tinderbox of activism even after so much watershed civil rights legislation had passed by the mid-’60s, and he participated in the takeover of the bursar’s office in 1968. The sum result of this institutional evolution is not a campus without prejudice but one committed to the development of each student regardless of race. According to the current provost: “There are unique needs across communities that are driven by different sets of cultural experiences, racial experiences, class-based experiences, etc., but I think it’s always important to articulate that fact that we are going to do the best we can so that every student can just be a student.” Both Lowery and Sterling graduated from Northwestern, and Sterling serves as president of the Northwestern University Black Alumni Association (Lowery once served as its vice president). The authors’ enthusiastic devotion to the university is constantly evident, and their knowledge of the institution’s history is breathtaking. One can only imagine the hours of labor it took to conduct and record dozens of thoughtful interviews. The result is rare: a massive archive of historical information that is not only a valuable scholarly reference, but a readable book brimming with insight and drama. Also, Lowery and Sterling supply an unvarnished account of a complex evolution that isn’t a simple triumph of good over evil. Alexandria Bobbitt graduated in 2016 and recounts her encounter with “blatant racism” despite years of progress and hard-won improvement. The authors clearly intended to capture the totality of the black experience, one that inevitably includes not only collegiate success and acceptance, but also the struggle against a prejudice that has proved remarkably persistent. They vividly limn the history of a people, of the diminishing but stubborn forces that discriminate against them, and the metamorphosis of the institution that ultimately championed their cause. This is an astonishingly instructive book and should be read by all Northwestern students and faculty, African-American and otherwise.

A painstakingly researched and affecting study.