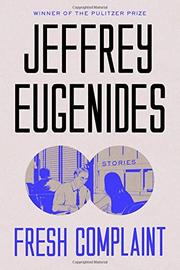 Two of the stories here are close cousins to Eugenides' novels: “Air Mail” features Mitchell, the lovelorn spiritual seeker in The Marriage Plot, battling a case of dysentery in Thailand, while “The Oracular Vulva” concerns a researcher studying the same intersexual characteristics that stoked the plot of Middlesex (2002). But neither of those stories reads like a lesser dry run for a more serious work, and the collection throughout is marked by a rich wit, an eye for detail, and a sense of the absurd. The plots often involve relationships hitting the skids, as in “Early Music,” in which a couple watches their artistic ambitions crash into the brick wall of fiscal responsibility, or “Find the Bad Guy,” about a green-card marriage gone awry. (The contents of the narrator’s pockets tell a pathetic tale in itself: “loose change, 5-Hour Energy bottle, and an Ashley Madison ad torn from some magazine.”) Eugenides enjoys putting his characters into odd predicaments: “Baster” centers on a woman pursuing a pregnancy via the title’s kitchen gadget, while the writer who narrates “Great Experiment” contemplates defrauding his wealthy but stingy employer, using de Tocqueville’s writings as a rationalization. But Eugenides never holds up his characters for outright mockery, and the two fine new stories that bookend the collection gracefully navigate darker territory: “Complainers” is narrated by a woman confronting her longtime friend’s dementia, and “Fresh Complaint” turns on a young Indian-American woman’s provocative scheme to escape an arranged marriage. We humans are well-meaning folk, Eugenides means to say, but life tends to force us into bad behavior.

Sprightly or serious, Eugenides consistently writes about complex lives with depth and compassion.