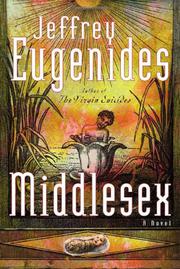 The verbal energy and narrative range of Saul Bellow’s early fiction (say, The Adventures of Augie March) are born again in this dazzling second novel, long-awaited since The Virgin Suicides (1993).

Narrator Calliope “Cal” Stephanides is a Greek-American hermaphrodite who eventually becomes a 41-year-old male living in Germany and working for the US State Department. But prior to that—thanks to Cal’s assumed ability to “enter the heads” of his relatives and forebears—we’re treated to a comic saga that begins in 1922 in the Middle Eastern port city of Smyrna, where Cal’s paternal grandparents, Desdemona and Eleutherios (“Lefty”), fall into incestuous love, escape the Turkish siege of their homeland by finagling passage to America (en route to Detroit, where they have family), then, concocting new identities, marry while aboard ship. Eugenides produces one brilliant set piece after another as Desdemona grapples with lifelong guilt; Lefty works briefly at a Henry Ford factory, then prospers as a restaurateur; their son Milton, following ominously in Lefty’s footsteps, marries his second cousin Tessie, becomes a hot-dog mogul, and fathers the medical miracle that is Calliope. The story is studded with superbly observed characters, including prematurely senile Dr. Philobosian, who examines, and fails to notice, Calliope’s remarkable sexual configuration; Lefty’s Cagney-like brother-in-law, bootlegger-entrepreneur Jimmy Zizmo; and the parade of comrades, presumptive lovers, and confidants encountered by Cal as she/he grows into gender confusion and away from suburban comfort in Grosse Pointe, survives the chaos of the late 1960s, and lights out for the territory of—what else?—San Francisco, finally making a kind of peace with her/his divided nature. Middlesex vibrates with wit, and shapes its outrageous premise (which perhaps owes a partial debt to Alan Friedman’s unjustly forgotten 1972 novel, Hermaphrodeity) into a beguiling panorama of the century in which America itself struggled to come to terms with its motley heritage and patchwork character.