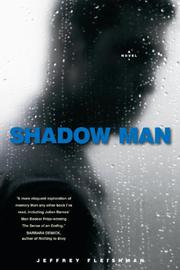 Fleishman’s second novel is a melodrama: Losing all but a memory of a single summer of his adolescence to early-onset Alzheimer’s, the protagonist loses his identity.

The Shadow Man of the title is James Ryan, once a respected foreign correspondent, afflicted with acute early-onset Alzheimer’s. He's housed in a care facility walking distance from his childhood home in Philadelphia. One nurse takes a peculiar interest in him, and there are a few pages of prickling suspense before she reveals an improbable secret. Nearly dead to the world, James dwells in a period not long after his mother was killed, a victim of a hit-and-run accident. The memory: James and his father, Kurt, live almost as roommates. Kurt paints ships and loves tennis. The callow James is an uneasy Catholic, devoted to the dictionary. The erratic Vera insinuates herself into their lives. Vera is the catalyst, and the majority of the book details a brief but fateful escape the three make to Virginia Beach. This episode, including his kisses with the flirtatious Alice, seems to contain the totality of James’ life, its vividness in stark contrast to the ashen present, where, in a bid to rekindle his memory, James’ wife, Eva, takes him to the Jersey Shore. Eva, who met James overseas, tells and retells him the story of his life, of their vagabond life together, including vignettes of James’ daring reporting. The novel’s emotional force is the tension between the past and present.

While there are moments of pleasure and passages of real skill, sentimentality eclipses the novel.