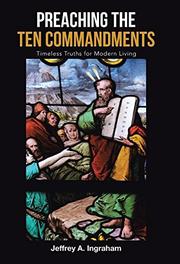 by Jeffrey A. Ingraham

A compact sequence of sermons on the meaning of the Ten Commandments.

Debut author Ingraham begins his fast-paced overview by asserting that the country is currently embroiled in a “religious war”—specifically, an “effort to distance the United States of America from its Judeo-Christian beginnings despite the abundance of evidence contained in the writings of the Founding Fathers.” He ignores the explicitly secular principles that the Founding Founders wrote into the First Amendment, instead launching into a full-throated defense of the Ten Commandments and a lament about the removal of a monument commemorating them from public grounds in Alabama in 2004. “How much safer we would be if only we obeyed [God’s] commandments,” he writes. “How better this world would be if only his commandments prevailed.” Some commandments, of course, such as injunctions against killing, stealing, and bearing false witness, do prevail in most countries of the world. The author’s main focus is on the first commandment (“Thou shalt have no other gods before Me”), and the book hardly acknowledges that billions of people adhere to non-Christian religions or no religion at all. Each successive chapter, however, goes on to explicate a single commandment in great detail, employing copious, well-chosen quotes from Scripture and anecdotes drawn from history. Ingraham is skillful at weaving the commandments into the broader context of the Old and New Testaments; he richly deepens his comments on “Thou Shalt Not Covet,” for instance, by discussing St. Paul’s teachings to the Corinthians. Other material is less comprehensible, however, such as “Put God first, and your mouth will be satisfied with good things such that your youth is renewed like the eagles,” which is no more understandable than its reference, Psalm 103:5. But for the most part, his preaching has a bluff, accessible air of long experience (“As our Creator, God knows what is best for us,” he points out. “His intent is not to be a killjoy”). Each chapter ends with a list of discussion questions, designed to prompt deeper examination of finer points.

A sometimes-rousing call for Christians to remember the commandments’ wisdom.