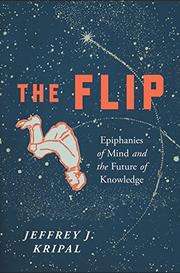 Epiphanies of Mind and the Future of Knowledge

In which the material world dissolves into the immaterial and all that we know from traditional material science melts into air.

What’s a flip? By the account of Kripal (Secret Body: Erotic and Esoteric Currents in the History of Religions, 2017, etc.), who holds a chair in religious thought and philosophy at Rice University and a research post at the Esalen Institute at Big Sur, it’s an intuitive leap that leads to a new understanding of a scientific problem or reality: “a radically new real can appear with the simplest of ‘flips,’ or reversals of perspective, roughly, from ‘the outside’ of things to ‘the inside’ of things.” Some of these flips might be such things as Archimedes’ bathtub-born insight into the displacement of volume and Friedrich August Kekulé’s dream about the snake eating its tail that led to his divination of how the benzene ring works. Kripal goes a little farther into the land of esoterica, noting, for instance, that Marie Curie was no stranger to séances, while Wolfgang Pauli “was a pioneering quantum physicist around whose presence poltergeist phenomena erupted regularly.” Philosopher A.J. Ayer returned from a near-death experience rather confused about what he saw on the other side, except to announce to the medical staff who revived him, “you are all mad,” while neuroscientist Marjorie Hines Woollacott drew scientific insight from an experience with a swami in the nature of consciousness, which is “most likely not an emergent property of brain matter, contrary to what everyone around her in her professional life seemed to assume.” Some of the science seems squishy even as Kripal insists that quantum physics is a “flipped science”—i.e., “one in which consciousness is no longer understood as an epiphenomenon, but as fundamental to the very nature of nature.” More easily comprehensible is the author’s idea that the humanities be reconceived as “the study of consciousness coded in culture," which has fruitful possibilities.

Kripal’s book won’t quite silence the inner skeptic in those trained in such truths as the laws of thermodynamics, but it offers plenty of points to ponder.