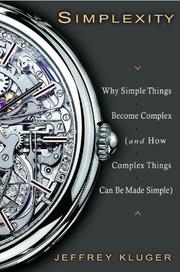 A middling book of pop science that attempts to explain why we so often see complex events as simple phenomena, and vice versa.

Time writer Kluger (Splendid Solution: Jonas Salk and the Conquest of Polio, 2005, etc.) simplifies—and at times dumbs down—some of the scientific notions that occupied James Gleick’s Chaos (1988). Many of Kluger’s lines of questioning are fruitful. After all, if scientific laws can be adduced to define the workings of the stock market, someone stands to make a bunch of money. Yet, what we know of the market, Kluger writes, is “surprising and counterintuitive,” in that “millions of blind and self-interested trades somehow settle on a fair value for tens of thousands of different companies.” Naturally, though, it’s much more complex than that. Just so, writes Kluger, viewed a certain way, a pencil becomes a complex object enfolding many technologies and materials, much as a Florida election disguises countless actions gone wrong. Sometimes these lines of questioning are not so fruitful, however: It seems stretching the point to say that the 9/11 hijackings were an impromptu system of luck, guesswork, fear and “ergonomics, fluid dynamics, engineering, even physics.” This kind of sizzle-but-no-steak writing is common in the pop-sci genre, and Kluger atones with case studies developed at somewhat more leisure, such as his examination of how speed humps work less well than neighborhood associations might wish. The complex human brain, it turns out, can be fooled into slowing down by a simple optical illusion. The book is scattershot, but with a few take-home points by way of reward—one, meant for old-timers, being that whereas smacking a piece of consumer electronics may have been a good fix a generation ago, it seldom works on techno gear today, satisfying though it might be.

Moderately entertaining airplane fare—in the Malcolm Gladwell school of explaining the world as it is, but without the flair.